When any club starts they keep score in their heads; then someone brings along a pocket scorer usually borrowed from a bowls player then someone find the pocket score keeper in the USA and buys a few. Eventually some makeshift scorers are made out of wood and pegs.

Our first attempts were basically a ruler fixed on top of a 2 b’ 3 wooden block and a nail. A hole was made in the sleeper and the nail located in that hole and the scorer stood at a jaunty angle and showed off its home made numbers drawn in felt tip pen by someone. A peg was used to clip opposite the number and it sort of worked. When both teams had the same number of points one of the pegs fell off. It stayed leaning in its hole somewhere near where the game was being played.

One day the chairman of the club says  “Let’s go for quality” and a few members get together and brainstorm what the perfect scoreboard should look like. Round our way many terrains are constructed by the local council and as a consequence all have railway sleepers as a surround.

Our design thoughts were simple. We needed stable stand-alone scoreboards that could be moved to wherever they were needed. They needed to be lightweight. They should straddle the sleeper and stand up straight. The numbers should be clear and professionally drawn. The pegs shouldn’t overlap each other. We thought of wood but ended up with plastic as a friend of a member owned a plastics factory. He bent a slab of white plastic into the desired shape (it’s about 150mm wide and 500mm tall). Another friend of a member produced a set of numbers printed as a see through transfer which could be applied to the face of the scorer. 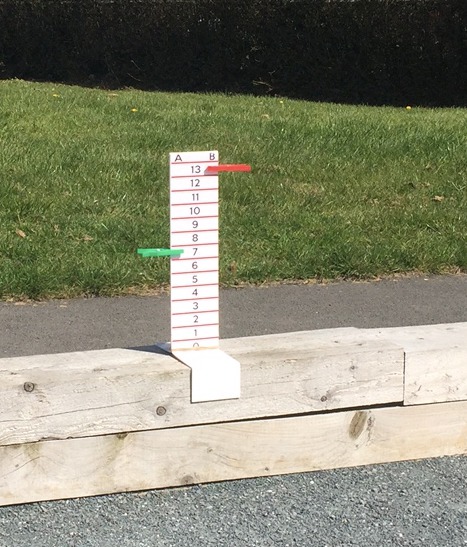 The finished product fitted all the design criteria. You can read the numbers from 12m away, the scorers can be moved to wherever the game is and they will always straddle the wooden sleepers. Pegs don’t meet in the middle. In fact they don’t cover the numbers at all. They all have temporarily an elastic band at the base that supplies enough tension to clamp the scorer onto the sleeper.

We spent money, obviously, but the effect is well worth it. These are solid, durable and look very impressive. If the numbers wear out we can replace them. Each scorer cost about £10 but I can see them being in use for many years to come.