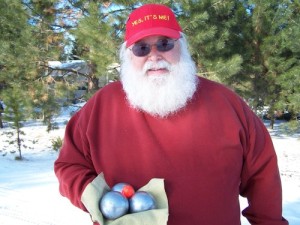 A cosmopolitan flavour to our Triples event. Players from The Fox, Wetherby, Heckmondwike, Mirfield as well as Huddersfield turned up, some in mixed club teams to try for the massive cash prizes on offer. Only 2 teams won all 3 games.

It was cold but light and we fitted in 3 rounds before the light went.

Only 2 teams won 2 games. Bouncing bombs ( Harry, Anne & Pam) and Nemesis +1 (Kevin, Christine and Janet) both had the same points diffference of +11 and were joint 3rd.

We also drew the Xmas baskets raffle and Alan from the winning team won one of these and Marie from Huddersfield the other. The raffle made £58 most of which goes  our annual charity.

Compliments of the season to all. We won’t be playing on Xmas day but Tuesdays and Thursdays continue.